Stories from the Field: One Leap for Mankind 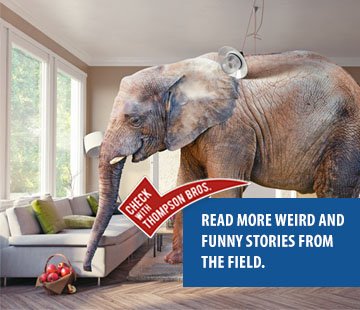 At Thompson Brothers, we have to have a sense of humor when it comes to removing unwanted pests from homes. Here’s one story that we recently came across that we technicians can all learn from:

We love the story of extermination technician “Austin” from Georgia who was called to a stately home outside of Atlanta. Their manicured backyard was a fantastic summer setting, surrounded by a by a 6-foot iron fence with an in-ground pool and custom decking. Austin recalls this was the kind of day that made him grateful to have a job that he loves, working outdoors. With no sign of any pets in the backyard, Austin proceeded with his inspection.

Everything was going according to plan until suddenly, Austin heard a growl from behind a shrub a few feet away. Within seconds, a giant German shepherd was snarling at him and launched into a full-speed vicious dash towards his face.

Austin notes that he wasn’t sure if it was the many hours of “Cops” or “National Geographic” that he had watched as a kid, but he went into total “fight or flight” mode.

After an attempt to protect himself, the ravenous shepherd continued his attack, so Austin managed to break away and flee with every ounce of his being. He sprinted over the custom pool decking, then preceded to leap 12 feet off the deck. Mid-air he had to make the decision to “land and leap” over the approaching iron fence a few feet from his landing spot. In an astonishing feat of adrenaline, he landed on his feet and then instantly leaped over the 6-foot fence. Stunned and shocked, he stood up on the other side of the fence, brushed himself off, and attempted to absorb at what he had just done. He stared in disbelief at the salivating dog, still barking in a fit of rage from across the fence.

Austin likened this adrenaline-pumping moment to the kind that allows people to have super-human strength in a moment of chaos.

We love this story because it’s one that we technicians can learn from: approach every backyard with caution, no matter how manicured and serene it might seem to be!

Contact Thompson Brothers today to set up a summer plan for your backyard basement or crawlspace with one of our trusted (and dog-loving!) technicians.

You Found Water in your Basement…Now What?

How to Get Rid of Fire Ants