What Does Early Spring Mean for Bugs? 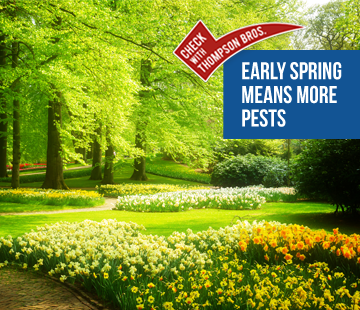 Despite some of those cool days we had in March, the spring season arrived surprisingly early this year, with a record-warm February in many regions. In fact, across the Southeastern U.S., including in South Carolina and North Carolina, data shows that spring officially arrived 2-3 weeks early.

This early spring means that many of us saw flowers and trees in full bloom as early as mid-February. Some of these blossoms were killed off in the mid-March chill, but others are well on their way to leafing out for summer.

How will an early spring affect us?

This early spring can actually bring with it some significant health problems for humans. First, those who suffer from allergies have certainly noticed the increased pollen levels. And with a longer spring season, they’ll be suffering from allergies for quite a while.

Additionally, expect to see an earlier arrival of ticks, fleas and mosquitos. Many of them were not killed off extensively in winter like usual, since the temperatures remained rather mild. These insects not only cause itchy bites, but they can carry serious diseases, like Rocky Mountain spotted fever, Zika, and more.

What can you do to prepare for more pests arriving earlier?

Don’t let this year’s predicated bad season of pests keep you from enjoying the outdoors. Take steps now to prepare for this early spring’s effects on the coming warmer months.

Taking the Sting out of Early Fall